A visualization of Southern Hemisphere surface winds from https://earth.nullschool.net

Southern Hemisphere westerly winds and pressure are important for many reasons, including glacier retreat and oceanic carbon uptake. Reliable climate data around Antarctica start in 1979, which is not enough data to understand recent activity. For example, it is unclear whether West Antarctica is retreating because of strengthening westerly winds, because we don't know whether the winds have actually changed. A longer record of atmospheric circulation around Antarctica is needed to understand what changes are happening and what may be causing them.

We use a framework called the Last Millennium Reanalysis, developed by Hakim et al. (2016)​, to reconstruct surface temperature, pressure, and winds around Antarctica from 1900 to 2005. This method uses a bayesian approach in which we start with a prior, which serves as our initial estimate of what the climate was. This is simply a random draw of a climate state from a climate model simulation. We then update that prior by bringing in information from proxy records such as ice cores and corals. If the proxy is in a location that covaries with the region we are trying to reconstruct, it is useful. For example, corals in the tropical Pacific are very useful for reconstruction pressure in the Amundsen Sea, as there is a very strong teleconnection between these two regions.

​We find that proxy-data assimilation reliably reconstructs atmospheric circulation around Antarctica, verified via comparisons to ERA5 reanalysis data for the period 1979-2005. The reconstructions show that strengthening and poleward-shifting large-scale westerlies are part of a long term trend throughout the 20th century. We find that winds have especially strengthened in the Pacific sector (around West Antarctica). We also find a distinct low pressure trend in the Amundsen Sea region, close to the coast of West Antarctica, which is a surprising finding that complicates the story of the drivers of glacier retreat in West Antarctica.  Read our paper in Geophysical Research Letters for more details. ​
O'Connor et al., 2021a 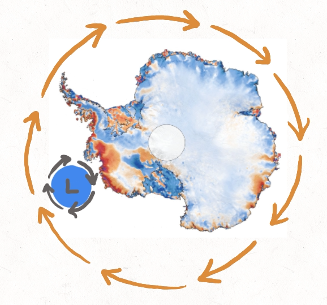 A schematic representing strengthening Southern Hemisphere westerly winds and the deepening of the Amundsen Sea Low. The greatest changes are occurring around West Antarctica, where glaciers are retreating most rapidly (red colors represent greatest rates of ice mass loss, from Smith et al., 2020). 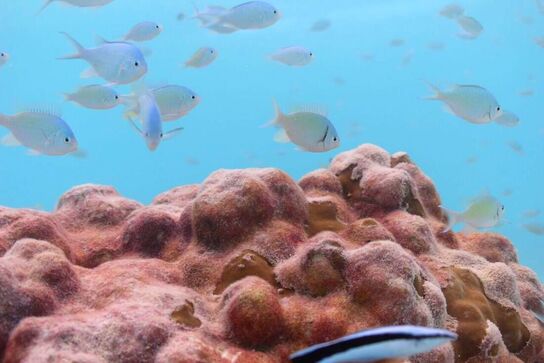 Coral oxygen isotopes (δ18O) are commonly used to reconstruct past El Niño-Southern Oscillation (ENSO) activity, from the past decades to millennia. However, coral δ18O reflects combined signals from both changes in precipitation and changes in warming, making it difficult to disentangle the signals. Calibration studies that document changes in coral δ18O, hydrology, and temperature are needed to understand these contributions. Furthermore, it is unknown how well corals record climate when they are under extreme stress, such as that associated with extreme warming and precipitation from a strong El Niño event.
We collected six coral cores from the central equatorial Pacific just after the very strong 2015/16 El Niño event, which we used to generate six coral δ18O records spanning the event. We analyze seawater samples collected throughout various stages of the El Niño, which we analyze for seawater δ18O and salinity. We also analyze in situ temperature data from loggers installed at the coral drill site. With this suite of data, we have the hydrological and temperature components documenting the event, and the corresponding coral records.

We find that all six coral δ18O records faithfully documented the 2015/16 El Niño event, demonstrating that coral δ18O is a reliable proxy record even during the largest class of ENSO events. We found greater variability in the corals records during the peak of the event, likely resulting from the stress they were experiencing, demonstrating that an ensemble of coral records provides helpful constraints. Using the combination of paired coral records and in situ data, we find that the coral δ18O records reflect a ~70% contribution from temperature, and 30% from hydrological changes.

Read more about our study in Geophysical Research Letters.
O'Connor et al., 2021b 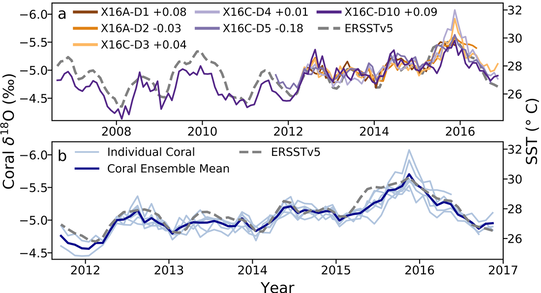 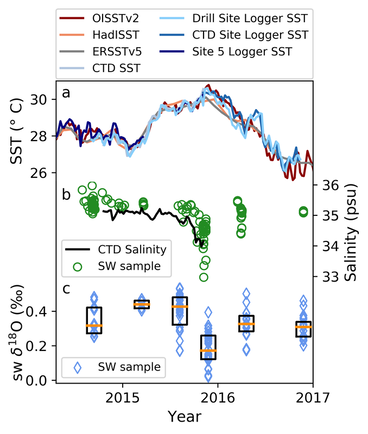 Time series of in situ data collected in our study, including sea surface temperature data, seawater oxygen isotopes, and salinity. The warming and the increase in precipitation (increase in freshness) are documented by the data.

​Glaciers on the West Antarctic Ice Sheet are rapidly retreating. Combined with the unideal topography of the bedrock beneath the ice sheet, West Antarctica is the most vulnerable ice sheet on Earth, with a potential to contribute up to 5 meters of sea level rise if fully collapsed. The complexities of the processes that affect the ice sheet make it very difficult to predict how stable it is. One particularly important question that remains unanswered is whether West Antarctica collapsed during the last warm period on earth-- roughly 130,000 years ago.

It has been proposed that a deep ice core drilled at Hercules Dome (shown in map below) would be well-situated to provide empirical evidence to answer this question, as it likely would have contained sufficient ice during the last warm period, and it would have been close enough to the region of collapse to detect changes in climate that can be measured in an ice core.  I was part of the field team that went to Hercules Dome in winter of 2019-2020 to do geophysical surveys to determine a precise location to drill the ice core, which will be ~1.5 to 2 km deep. We conducted surveys with various types of ice-penetrating radar all over the dome, collecting about 600 km of deep radar data ("deep" meaning we can see all the way to the bedrock). These data allow us to see the layers of ice beneath us, allowing us to pick an optimal ice core site.

Site selection and analysis of the geophysical data we collected is ongoing, in collaboration with the Christianson group at the University of Washington. See the Hercules Dome ice core website for more details on the status of the project and for ways to get involved. See my field work page for photos and video of our field season.